Hillary and Donald, BFFs forever and ever 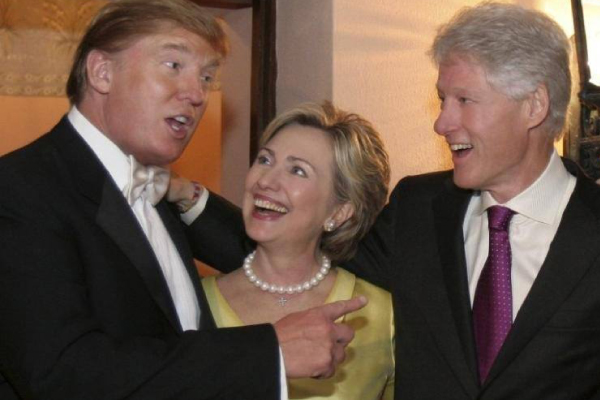 According to the Center of American Women in Politics, in 2012, 64% of women and 60% of men voted. Racial demographics according to the Pew Research Center estimate that by November 2016, the voting public will consist of 70% whites, 12% Hispanic, 12% Blacks and 6% Asian. For a racist (a.k.a. Trump), it seems like it would be in the bag. But when you break down that 70% of white people down into their ethnicities, it paints a different picture. “White” consists of a lot more than “White Anglo-Saxon Protestants.” As a matter of fact, since 1978, the U.S. Department of Justice Federal Bureau of Investigation categorizes “white people” as “people having origins in any of the original peoples of Europe, the Middle East, or North Africa.” So those “white” people include Muslims, Arabs, Jews, and Orthodox Christians from areas such as Syria, Iraq, Greece, Bosnia, Turkey, and the rest of the countries we’ve screwed by creating perpetual warfare. It would seem to me that isolating the populations that have the largest voting majorities would be political suicide. The entrepreneurial Trump must know that much.

But what if that was the plan all along? The Clinton and the Trumps have had a long cozy relationship together.

Beginning in 1998, Trump publicly supported former President Clinton during the Lewinsky Scandal. In 1999, Trump told a NY Times reporter that if not for the scandal, Bill Clinton would have gone down “as a great president.” In 2000 in an interview with Jessie Ventura, he went on a rant about whistleblower, Linda Tripp, calling her the “personification of evil.”

In 2005, at Donald and Melania Trump’s wedding, Hillary Clinton was granted a front-row seat at the ceremony. The former president joined her at the reception at the Mar-a-Lago estate in Palm Beach, Florida. A picture of the Clintons and the newly wed Trumps has been exposed so many times it has been called “the event that explains the 2016 election.”

Back in 2007, Trump praised Hillary Clinton among the presidential candidates then as someone who could make a good deal with Iran. “Hillary’s always surrounded herself with very good people,” Trump told CNN’s Wolf Blitzer in 2007. “I think Hillary would do a good job.”

In October of 2008, in an interview on CNN, Trump slammed George W. Bush for getting into the Iraq war “with lies,” and suggested that his actions warranted impeachment much more than President Clinton, stating “and they tried to impeach him, which was nonsense.” The same year, the two were photographed in July at the Trump National Golf Club in NY.

Even Bill Clinton himself spoke highly of Donald Trump. In an interview in May of 2012, the former president said, “I like him. And I love playing golf with him.” At the same time, Trump was playing the predominant role in the “birther” movement, where Trump vehemently questioned the authenticity of President Obama’s birth certificate.

On Larry King in October of 2013, Trump was asked how he felt about Hillary Clinton running for president. With flattery he responded, “Yeah, and I know her very well. They’re members of my club, and I like both of them very much, and he was with you one time and he said he likes me,” Trump said, adding, “and I do like him.”

In May of 2015 right after Hillary announced her entrance into the race for president, Bill Clinton spoke to The Donald, and reportedly encouraged him to take a front and center role in the 2016 presidential election. A month later, Trump became a contender.

And of course! Let us not forget that Ivanka and Chelsea, like their parents, are BFFs too!

I have often said that growing up Arab means you were taught to be a skeptic. I was taught to distrust the government and the media (which was probably working for the government). Our parents weren’t just paranoid. There was truth to it. In the Middle East, governments and media were traditionally linked and it was essentially common practice for the media to simply relay the message of the government rather than the reality of the people. Of course, here in the United States, we grew up thinking that “freedom of the press” was the people’s reality. Unfortunately, it seems our hypersensitive parents were right. The media has simply become a mouthpiece for the candidate who has paid the most money to the most connections to get the most airtime. In 2016, that means we are stuck with Trump and Clinton.

* Shirin Zarqa-Lederman was raised in NJ by her Palestinian Muslim parents and later married her Russian Jewish husband. Together they have five interethnic children who experience the traditional customs of both cultures with their extended interethnic relatives. Shirin is also Licensed Professional Counselor, focusing on Child & Adolescent Psychology, and has written her own children’s picture book series, "The Trotters of Tweeville," which is focused on demonstrating kindness to children. The series is available wherever books are sold.
One comment