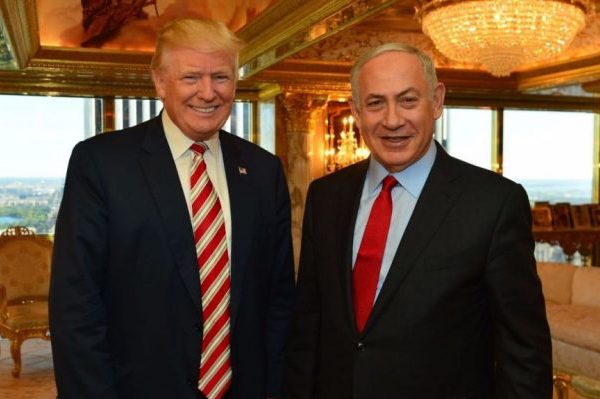 The events of the past couple months circulating around the Palestine/Israel saga have been even more intriguing than usual. From December’s passing (and controversial US abstention) of United Nations Resolution 2334, to the Obama-Bibi breakup, to John Kerry’s 70-minute speech in his last days as Secretary of State, there has been no shortage of drama. And today’s joint press conference between Donald Trump and Benjamin Netanyahu brought us some new theater. Trump said he would be okay with a one-state solution in my homeland. “I’m looking at two-state and one-state… I can live with either one,” he told the world.

As I watched today, the President of the United States and the Prime Minister of Israel (who I affectionately call #Trumpenyahu) gave me hope. Yup, you read that right. Now, I’m optimistic by nature (There’s no other way to be a Palestinian, I think). But today I thought to myself, “#Trumpenyahu could actually liberate Palestine!” Not on purpose, of course. But I’ll take it!

Netanyahu and his government want all the land. All of it. Gaza too, after they found natural gas there. (As a rule of thumb, countries don’t usually bomb places they don’t want to control.) The Israelis do have the small problem of deciding what to do with us pesky Palestinians, though. A couple days ago, Israeli president Rueven Rivlin suggested that should Israel annex the West Bank, the almost 3 million Palestinians living there should get full citizenship. Sounds good to me. Rivlin is an old-school right-wing hardliner, by the way. He’s no dove. Many on the left are scared of annexation, even going as far as to initiate a billboard campaign throughout Israel warning citizens that it would lead to a Palestinian majority in “Greater Israel” (that’s all of Palestine to all you Palestinians out there). Sounds good to me too.

It’s time, and has been for some time, for us Palestinians to get on board with Israel’s right-wing and advocate for one state in all of historic Palestine (Israel, Jerusalem, West Bank, and Gaza). I’ll be the first to say to #Trumpenyahu, “I’m with you.” Let’s go for a “Greater Israel.” In fact, I have a slogan for it: “Make Israel Great Again.”

One state in Palestine is a great idea. Here’s why:

Those are just some of the reasons one state is an awesome idea. Of course, political, religious and social equality is good too. But for some reason, Israel has never gone for that argument.

Of course, both sides would have to give up something very dear. The same thing, actually. Neither side would get to say the land is totally theirs. No Palestinian state, no Jewish state. Just a state of its people, respecting all faiths, based on secularism and equality. Doesn’t sound so bad, does it?

Of course, we would have to change some things. The flag is a little too exclusive right now. I suggest a new one that represents all of us. Maybe three stripes. Brown-Green-Brown. To represent a falafel patty. Or maybe just a drawing of a hairy person with a big nose. That could represent all Semitic peoples. Men and women.

We probably also have to alter the name of this new state. “Israel” sort of only represents one religion. Maybe we call it “Holyland.” Or “Abrahamistan.” Or just call the whole place “Jerusalem.”  We could even call it “Palestine.” Jews should be okay with this. I’ll even change the spelling to “Palestein” to make everyone happy.

Let’s do it. Let’s unite. Let’s stop fighting over land, religion, and hummus. Most of all, let’s all get rich together. Let’s put Palestein on the map!

* Amer Zahr is a Palestinian American comedian, writer, professor and speaker living in Dearborn, Michigan. He is also the editor of "The Civil Arab."
2 comments