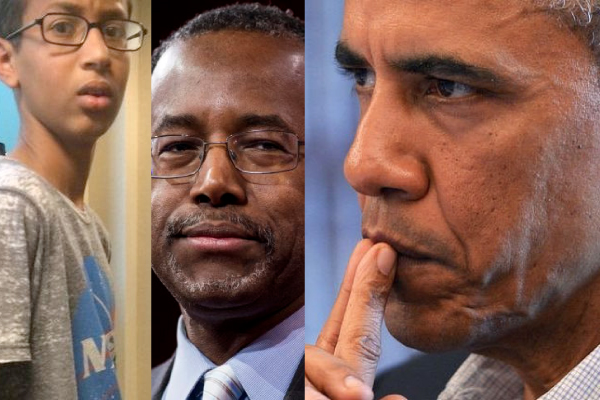 I’m just like you. Sure, I’m an Arab Palestinian, and you’re a white-Anglo-Saxon-black-Kenyan. But we’re both Americans. And we have one more really important thing in common. Like you, I have one Muslim parent. Your Muslim grandparents were Hussein and Habiba. Mine were Muhammad and Laila. I, like you, flirted with Islam from time to time in my more youthful years, and I still, as you do (even though you have to avoid saying it), consider my Islamic roots an integral part of who I am. We are both, in part, culturally Muslim. We both know what it’s like watching grown men fight over the bill. We also both know what’s it like being around people who don’t know what an “inside voice” is. But most importantly, we both know what it’s like to be told that we don’t belong in America.

We Arab and Muslim Americans are quite accustomed to becoming targets during presidential elections. We remember how Newt Gingrich, quite obliviously, called  Palestinians “invented” in 2012. We listen to presidential candidates, quite proudly, time and again define their foreign policy agendas on promises of bombing Arab and Muslim countries. We have seen many “conservative” Americans, quite viciously, come after you for having some Muslim roots. We remember how Republicans, quite audaciously, criticized you for having a “Palestinian friend.” And we recall, back in 2008, how John McCain replied, quite awkwardly, when a woman told him she couldn’t vote for you because you’re an “Arab” (she probably meant Muslim, but “Arab” and “Muslim” are so often conflated in this country, and racists are rarely discerning). McCain retorted, “No ma’am, he’s a decent family man.”

Mr. President, bigotry against Arabs and Muslims in America is stylish. It garners votes. No one has to resign, or drop out of the presidential race. Every season is open season on us. We’re the only group this still happens to. We are racists’ last hope. And as you can personally attest, being only half a Muslim is no help. You still get the full Islamophobic package.

Something quite funny happened over the weekend, by the way. That John McCain episode (the aforementioned “decent family man” one), an occurrence that we Arabs and Muslims have held up for some time as an example of open-faced bigotry (since he sort of implied that Arabs can’t be decent family men), was recast as a moment of acceptance. Last week, Republican front-runner Donald Trump championed a question once again theorizing that you are an undercover Muslim. The media jumped on him, reminding us all how McCain so “graciously” handled his racist questioner eight years ago. It was quite uncomfortable for us. The villain was the one who stood silent when you were “branded” a Muslim, and the hero was the one who proclaimed that you weren’t because you’re “decent.” Perhaps you can see why that scares us.

And now Ben Carson has told us that all Muslims, by virtue of their Muslim-ness, are unfit to be president. (He didn’t clarify how he feels about the half-Muslims like you and me, but I can only imagine.) You might find it ironic, as I do, that a black man in America is declaring that members of a minority community shouldn’t lead the country, but that’s not the important point. What Carson’s commentary really highlights is the present prevalent discourse, whose default notion is that Islam is somehow diametrically opposed to American identity and ideals.

This discourse allows politicians to traffic in hate, whether it’s Carson, Allen West, or Joe Walsh. It allows for the quite routine dehumanization Arabs and Muslims in the media and entertainment, whether it’s “American Sniper” taking the crown as the highest-grossing movie of 2014 or the Arab American Muslim murder victims of a hate crime in Chapel Hill getting less-than-immediate treatment by the mainstream media. It cultivates an economy of Islamophobia led by unqualified “professional experts,” whether it’s Pamela Geller, Brigitte Gabriel, or Paul Cruickshank, none of whom have advanced degrees in Islam or the Arab world. Gabriel and Geller didn’t even graduate from college. You would think that becoming a “radical Islam expert” would require more training than becoming a sandwich artist at Subway.

The current atmosphere also consents to the arrest of Ahmed Mohamed, the 14-year-old Muslim high school freshman in Texas who brought a homemade clock to school and was dragged off to jail for the offense of making a “hoax bomb.”

Now, sir, let me make a few points about Ahmed’s incident. First, he couldn’t be even mildly accused of the “hoax bomb” crime since an necessary element of the “hoax” is trying to “hoax” people into believing it’s a bomb. He told everyone it was a clock. No hoax. Second, Ahmed showed a few teachers his clock before he encountered the English teacher who eventually tattled on him. That teacher could have easily spoken to those other teachers and discovered within a couple minutes that there was no reason for alarm about the alarm clock. Oh, and third, I know it might be a bit confusing that Ahmed kept telling everyone that he brought his “invention” to school. Of course, Ahmed didn’t “invent” the robotic alarm clock. It has existed for some time. But you can chalk this up to the tendency of Arabs to exaggerate a bit about their own accomplishments. It’s a cultural thing.

Oh, and finally, can we do away with the whole notion that they thought he actually had a bomb? They didn’t think he had a bomb. When they think you have a bomb, they evacuate the school and call the bomb squad. They don’t call the police to come talk to you while you’re holding your bomb. They interrogated him, a child, without his parents or lawyer, knowing he didn’t make a bomb (or a hoax bomb). It all happened because Ahmed Mohamed is named Ahmed Mohamed. It happened because he is a Muslim, because when you’re a 14-year-old Christian kid named Dustin, they give you the benefit of the doubt that you didn’t bring a freakin’ bomb to school!

Now, I really do want to thank you for reaching out to Ahmed, encouraging him, and inviting him to the White House. That was really cool. But you could do one more seemingly small, yet quite monumental thing.

Back in 2008, some time after John McCain told Americans that you’re not an Arab because you’re decent, General Colin Powell told Tom Brokaw:

I’m also troubled by, not what Senator McCain says, but what members of the party say, and it is permitted to be said. Such things as, “Well you know that Mr. Obama is a Muslim.” Well the correct answer is, “He is not a Muslim, he’s a Christian, he’s always been a Christian.” But the really right answer is, “What if he is? Is there something wrong with being a Muslim in this country?” The answer is “No. That’s not America.” Is there something wrong with some 7-year old Muslim-American kid believing that he or she can be president?

So, Mr. President, we need you to speak up. But don’t say something like, “This is the land of religious freedom. We won’t stand for bigotry. American Muslims are as American as everyone else.” That doesn’t really get to the point. And it isn’t the sort of thing MLK or Nelson Mandela would say. It’s the sort of thing Hillary Clinton would say. Sure, it’s supportive, but it’s not too ground-breaking.

We need you to say, quite forcefully “So what if I were a Muslim?” In fact, we should all say it, loudly. But it needs to start with you, our leader. Because, after all, if you can’t do it, how can we?

* Amer Zahr is a Palestinian American comedian, writer, professor and speaker living in Dearborn, Michigan. He is also the editor of "The Civil Arab."
6 comments