Sam Harris, Bill Maher, and their amateur hour on Islam 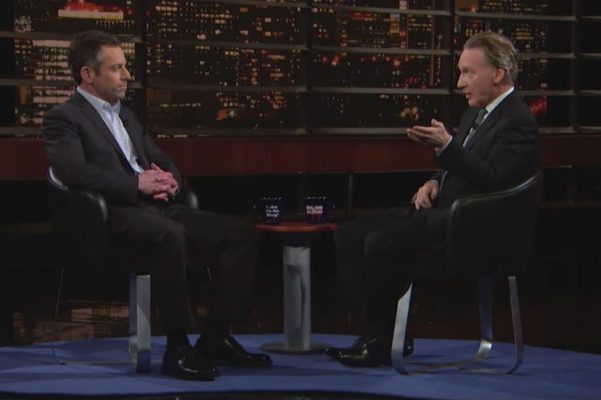 It is quite easy to identify the Islamophobia of Donald Trump and many on the right. The “Muslim Ban,” manufactured rage about sharia law, Muslim registries… these things are quite simple to get worked up about. Civil rights organizations, Muslim and non-Muslim alike, rightly point these things out and criticize them roundly.

But these things are not our main problem. We can build coalitions against such in-your-face bigotry (one of the positive offshoots of Trump, if I’m looking for any). Countering blatant Islamophobia is necessary. But it is not a brave exercise. The challenge is how to deal with the latent sort, the brand of Islamophobia that cloaks itself in liberalism.

We all remember Hillary Clinton pronouncing in presidential debates that we need “to work with American Muslim communities who are on the front lines to identify and prevent attacks.” She went further, telling us that “we need American Muslims to be part of our eyes and ears on our front lines.” Her liberal framing of Muslims solely in terms of national security and their usefulness in the fight against “terrorism” is in many ways more dangerous than blatant Trumpian Islamophobia, mainly because it is more difficult to identify, while being just as treacherous.

We all remember Clint Eastwood’s widely lauded “American Sniper,” a film that basically consisted of a white American serviceman shooting Muslims for two hours. It was our country’s highest grossing film of 2014 to the tune of $350 million. The main character’s moral crisis was when he labored over whether or not to shoot a child (spoiler alert: he did). It was nominated for five Oscars and celebrated by the American left.

Sam Harris and Bill Maher serve as the intellectual, pop-culture kings of this liberal strand of Islamophobia. Last Friday, Harris sat down with Maher to discuss jihadism, Islamism, terrorism, and all things related. Harris started out with, “We have to win a war of ideas with the Muslim world.” This is the go-to mantra of those who believe in the tired idea of a “clash of civilizations.”  In other words, that Islam is, per se, incompatible with “Western”/American life.

Guys, by the way, this “clash of civilizations” stuff is so dated.  Anyone who still talks in those terms might as well be wearing an Ed Hardy t-shirt.

Harris went to say that Muslim world needs to rid itself of the stain of extremism, and that “only secular, liberal, and former Muslims can police this for us.”  In other words, only Muslims far from anything traditional, or better yet those who have rejected the faith altogether, can save Islam. “For us,” of course.

He used the way-out-of-style catchphrase “moderate Muslims.” “We need to reach out to them.”  Maher, of course, ate it all up, adding, “We are never going to defeat terrorism is we don’t reform Islam.”  He added his own colorful analysis of Muslim societies, with some really insightful commentary on female Islamic wear, telling us that “Muslims blame women for men’s horniness.”  Of course, patriarchy and misogyny are not the exclusive domains of any one society, and they are surely not foreign to America. Brock Turner, anyone?

Let me talk about this “moderate Muslims” trope for a second.  There is never any recognition by anyone who uses it that “moderate Muslim” means something totally different to a Muslim than it does to Harris and Maher.  In fact, the “moderate Muslims” Harris is attempting to refer to (I think), namely activists, intellectuals, opposition figures, secularists, don’t use the term at all. Except Harris uses the term, he invokes people like Ayaan Hirsi Ali, individuals who have rejected the faith and culture altogether.

Ultimately, what Harris and Maher are saying is that the problem with the Muslim world is, simply, Islam.  This is reductionist, undeveloped, and just plain stupid. It demonstrates a blatant ignorance of any history of Islam or the Arab world.  And this should not be surprising, as neither has any advanced degrees in the area.  Harris is a neuroscientist, and Maher is Maher. They are not not scholars of the subject, self-taught or otherwise. And it shows. Maher’s simplistic discussions of the hijab and Harris’ facile paradigm of Muslims as jihadists, Islamists, and conservatives display a juvenile misunderstanding of Muslims and their sensibilities.

But what’s most damaging is that these two are celebrated as sophisticated, enlightened commentators, as liberal critics of Islam.  Hey guys, I like my whiskey. I eat bacon sometimes (I’m American, after all). A sheikh would not approve of many of my lifestyle choices.  I can diagnose all the individual ills of the Arab/Muslim world that you can.  I see the need for reform. I hate ISIS (I thought I would just say that for the record). I see myself as part of the greater Muslim fabric. I’m a secular liberalist who dislikes religion in governance. But I can never get on board on with you.

As long as you continue to assert that the problem with my homeland is my heritage itself, you’re just blowing hot air.  When it comes to talking about Islam or the Arab world, it’s amateur hour with you two. It’s almost as if you’ve never read reformers like Ali Shariati, Fatima Mernissi, and the like, who have invoked the egalitarian traditions of Arab and Muslim societies as the way forward.  To paraphrase Bill Clinton, I believe that there is nothing wrong with my people that cannot be fixed by what’s right with my people.  And I’m not alone.  So, if your objective is to get leftie Arabs like me on your side, you’re failing terribly.  If your goal is to talk about about my people in no more advanced terms than Donald Trump, then you’re doing a great job.

* Amer Zahr is a Palestinian American comedian, writer, professor and speaker living in Dearborn, Michigan. He is also the editor of "The Civil Arab."
3 comments