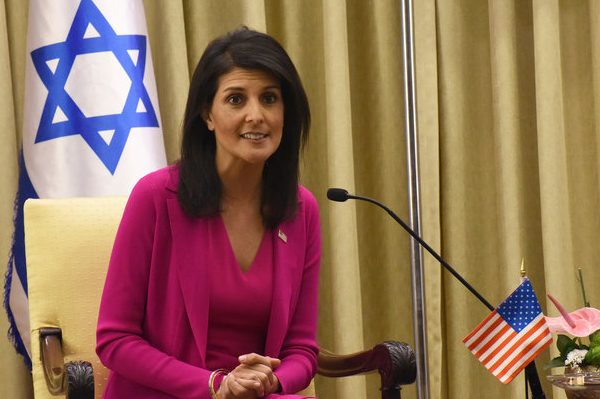 Every time I hear Nikki Haley’s voice, something happens. Even as a psych student, I am not sure that I can explain it. It kind of feels like a Minotaur lives inside me and awakens in screams at the sound of her voice. I’m pretty sure it’s not normal, but then neither is Nikki Haley. Her revolting assessment of the situation in the Middle East, and her comments about Palestinians (or shall I say, lack of comments) does nothing but affirm the bias this administration has against Palestine and its people. Time and again, she has shown a complete lack of regard for Palestinian life.

Just this past week, she had the audacity to accuse Russia, the same country that allegedly helped her main squeeze get elected, of having “the blood of Syrian children on their hands.” Now, I am NOT defending Russia, nor am I minimizing the stolen lives of Syrian children, but I AM calling bullshit on this administration’s patronizing condescension for human life.

Over 30 Palestinian protestors have been murdered in cold blood by the IOF, and Ms. Haley and friends remained silent. Even after viral videos of snipers gunning down unarmed civilians, and IOF soldiers cheering after their kill as if they were hunting, there was not one utterance of dismay from anyone in the current administration.

They paralyzed a Palestinian soccer player, and killed a journalist wearing a vest marked ‘PRESS.’ The IOF and all its arrogance to tweet that the shots were “accurate and measured.” Sounds like assassination, but not to Nikki Haley and the rest of the clowns in the Trump circus. Those freaks vetoed the United Nations call for an investigation into the murders of Palestinians-twice! I am not sure why I am so surprised, Nikki Haley was proud to admit to AIPAC at their conference that the US ensured that when a Palestinian was nominated for the “highest position that had ever been given at the UN,” they said, “no,” and “had them booted out again.” Does that not prove a bias?

Perhaps what is so infuriating is the fabricated image that Nikki Haley has portrayed. She is a “Haley,” by marriage. Her name is Nimrata Randhawa-she is Asian Indian. Her parents migrated from Punjab, India. She was raised as a Sikh. She’s not some lily-white southern belle, she’s a whitewashed Indian who converted to Christianity. And clearly, she’s not good at protecting Christianity either considering how she has treated the people from the very place that Christ was born!

Nimrata is a fraud, like the rest of this administration and her pathetic attempt to pacify the masses with her pretend sensitivities are insulting. And for the record, if your name is Nimrata and you’re a child of an immigrant and you act like you are a southern belle, you’re confused. Or delusional.

* Shirin Zarqa-Lederman was raised in NJ by her Palestinian Muslim parents and later married her Russian Jewish husband. Together they have five interethnic children who experience the traditional customs of both cultures with their extended interethnic relatives. Shirin is also Licensed Professional Counselor, focusing on Child & Adolescent Psychology, and has written her own children’s picture book series, "The Trotters of Tweeville," which is focused on demonstrating kindness to children. The series is available wherever books are sold.
6 comments