I said, “Please don’t be Arab” … then I realized he couldn’t be 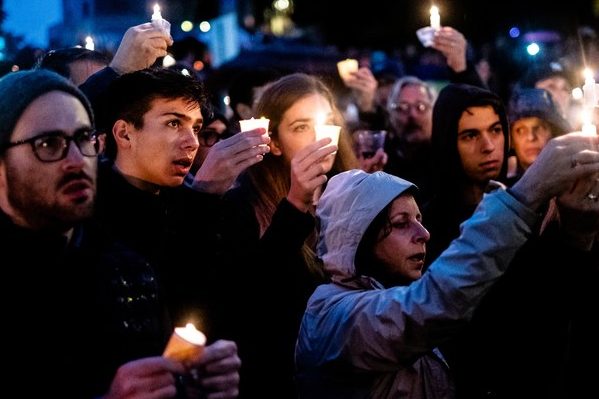 This past weekend, in the Squirrel Hill neighborhood of Pittsburgh, Robert Bowers calmly walked into the Tree of Life Congregation and murdered eleven Jewish parishioners.  Reportedly, he yelled out, “All Jews must die!” It was the single deadliest attack on Jews in American history. May the victims rest in peace and may their souls be exalted.

Unsurprisingly (to us, at least), multitudes of Arab and Muslim individuals and organizations immediately denounced the massacre and raised tens of thousands of dollars for the victims’ families. Just about every major American Muslim or Arab organization immediately issued announcements expressing solidarity with our Jewish brethren, including American Arab Anti-Discrmiination Committe (ADC), American Muslims for Palestine (AMP), and Council on American Islamic Relations (CAIR), and more. ADC is the oldest Arab American civil rights organization. AMP is one of the nation’s largest Palestinian membership groups. CAIR is the largest Muslim civil rights organization in America.

While most everyone else also decried the murders and reached out to the victims, Arab/Muslim actions toward our fellow Jewish Americans took on a different gravity. And that’s because of the longstanding and false narrative that we instinctively hate Jews. Or more precisely, because of the notion that we would be the natural prime suspects in such a ruthless act of mass murder.

And the media has caught on, loudly celebrating the efforts of Muslim Americans. Is it heartening to see such support highlighted? Sure. But let’s keep something else in mind. Media fascination with Muslim and Arab support of the Jewish victims in Pittsburgh is predicated upon some of the most insidious and hateful stereotypes of our people.

Yes, I prayed that it wasn’t one of us who so heinously attacked our Jewish brothers and sisters. But in the midst of it all, I thought of something. We don’t do this sort of thing. Neither do Black people, or Jews, or Latinos, or Native Americans, or Asians. In American history, attacking a house of worship is almost exclusively a white Christian crime.

Blowing up Black churches over and over.
With children inside.
Murdering black parishioners in South Carolina after praying with them.
Massacring people in a Sikh temple in Wisconsin.
Burning down or vandalizing mosques. In Texas. Washington. New Mexico. Minnesota. Tennessee.
And, of course, while the Pittsburgh attack was brutal, it was, sadly, not singular in American history.


From its inception and before, Christian whiteness and Americanness have been inextricably and overtly linked. And this kinship has come with massively deadly consequences. Slavery resulted in the bondage and murder of millions of black Africans. “Manifest destiny” led to the massacre of millions of indigenous peoples (that’s why most of the country is named in Ojibwe, Algonquian, Sioux, Choctaw, and other indigenous languages) as well as the theft of much of Mexico (that’s why most of the Southwest is named in Spanish). Yes, white supremacy has to deal with the fact that it feels God-given rights in places named San Antonio and Mississippi.

It’s wildly important to note that being white is not simply incidentally related to being American. No. It’s much deeper than that. We’ve all heard, “Correlation doesn’t always mean causation.” But in the case of what has historically made one an “American,” whiteness has been the causal link. From 1790 until 1952, being a “free white person” was a prerequisite for naturalization as an American. When people like Donald Trump talk about “our country,” they are simply continuing a long American tradition of equating one’s right to be a citizen with his hue.

And Robert Bowers, though it’s been reported that he wasn’t crazy about Trump due to the latter’s not being racist enough for him, agreed with the president on this core value. To both of them, America belongs to one group of people. Everyone else is, at best, a guest or, at worst, an invader. And while those views might be reprehensible, they’re nowhere near new.

So, when I heard of Jews being killed in America for being Jews, coupled with my initial sadness and horror, yes, I thought, “Please don’t be one of us.” But then I quickly realized it couldn’t be.

Bowers had a long history of racist rants. Quite predictably, his community still expressed shock at his actions. One of his neighbors even said, “He just seemed like a normal guy.”

If American history is any indicator, he sure was.