Anthony Bourdain, Will You Marry Me? 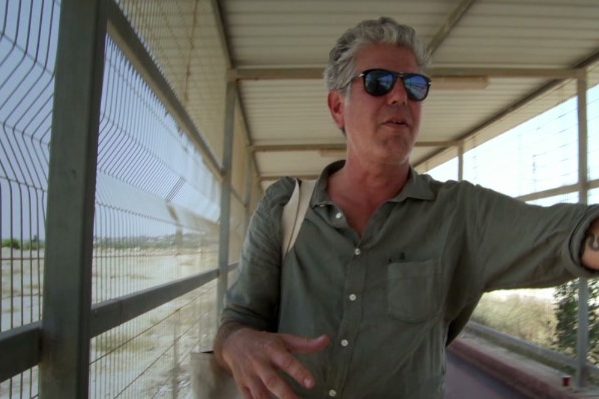 Something amazing happened on CNN last night. Palestinians were portrayed as human beings.

In his show “Parts Unknown,” Anthony Bourdain travels to exotic and controversial locales to examine the intersection of food, politics, and everyday life. Last night, he visited Jerusalem, the West Bank, and Gaza.

He was immediately mesmerized by Palestine, which is a common phenomenon. It is an amazing place, where the gravity of the history and spirituality is heavy in the air. It feels majestic. But something is a little off. Bourdain felt the splendor, but, as he said, “Then you see the young draftees (teenage Israeli soldiers holding machine guns) in the streets, and you start to get the idea.”

He began his journey with an Israeli chef and author, Yotam. They started by tasting some falafel in Jerusalem’s Old City. Yotam told the audience, in a stunning admission, “Israelis made falafel their own, and everybody in the world thinks falafel is Israeli, but in actual fact, it is as much Palestinian, even more so, because it’s been done for generations here… The question of food appropriation is massive here.”

Now if they could only say the same thing about the land, the houses, and the air, we might be able to get somewhere.

Bourdain then made his way into the West Bank. And on his way to visit a settlement, he said something that Americans never hear on TV:

In 2003, Israel began construction on a wall along the green line representing the Israeli-Palestinian border. The wall now stretches 450 miles. When completed, it will span 700 miles, 85% of it in Palestinian territory… Since 1967, 500,000 Israeli settlers have moved into the West Bank, all in contravention of international law, many in contravention of Israeli law, though in effect it seems to make little difference, they’re here and in ever larger numbers.

Before he got to the settlement, he noticed some Hebrew graffiti on a Palestinian house in a neighboring village. His driver translated it for him: “Death to Arabs.”

Bourdain finally made it to the settlement of Eli. Eli is located north of Ramallah and in the heart of the West Bank. It is nowhere near the 1967 borders. He asked its chief executive, Amiad, what Palestinians might think of its existence. He told Bourdain, “Actually they are happy we are here. We gave them prosperity for the past 45 years.” I was worried the show might go in a bad direction, but then Bourdain said, “I’m guessing a lot of people would disagree with that statement.” Wow, I think he’s getting it. Then Bourdain said, “So, from the high ground, you can see anyone walking at night, you can see pretty far out.” Wow, he is getting it!

As Bourdain prepared to leave Eli, he brought up the disturbing graffiti he saw with Amiad. “Why not paint it over?” he asked innocently. The response? “Good question. Maybe we should. You’re right.” I’m sure Anthony knows he’s not the first person to suggest such a thing. Now, Anthony, I am a bit more experienced with Israeli talk than you are, so let me translate that. “Good question. Maybe we should. You’re right,” really means, “Silly question, we definitely won’t, get out of my face.”

Bourdain then made a quick visit with a now famous group of Palestinian female drivers called “The Speed Sisters.” Now this visit had nothing to do with food, but he was able to be in a car alone with Betty Saadeh, a hot Palestinian woman. And you don’t turn down an opportunity like that. He even looked like he caught a little case of Palestinian fever. I can relate.

After visiting Jerusalem, Bourdain took the short but interesting drive into Bethlehem, through a checkpoint, and past the infamous wall:

It’s right there for all to see. And it feels like something out of a science fiction film. This is the wall. From the other side, from inside this place, it doesn’t feel like anything other than what it is. A prison.

Bourdain visited Aida refugee camp, just north of Bethlehem. There he met Abdelfattah Abusrour, my friend, and the founder of Ruwwad, a group that uses theatre for young people to express their desires and feelings. Abusrour sees Ruwwad as nonviolent resistance, a way for young people to express themselves, creating what he calls “a peace from within.”

The honest portrayal of the residents of the camp, from their squalor to their own struggle to find productive channels of resistance, was something I had never seen on American TV. Bourdain noted that these Palestinian children do not have the luxury of idolizing pop stars and athletes. They turn to politics early, sometimes idolizing martyrs and politicians. And he’s right, there’s something wrong with that. We Palestinians are normal in so many ways. And we’re so not normal in so many others.

Then Bourdain went to Gaza:

Getting in and out of Gaza from Israel is truly one of the most surreal travel experiences you could have on Earth. Over 1.5 million people live in Gaza, most of them considered refugees, meaning they are not from the place they are compelled to live now. In most cases, they are either prohibited from or unable to leave. Israel decides who comes and goes, what gets in and what stays out.

In Gaza, he met Laila Haddad, a well-known Palestinian author and activist who has written books about Gaza life and cuisine. As she explained that Gaza’s cuisine should include a lot of seafood, she noted that fishermen can rarely get prize catches as the Israeli military limits how far out they can sail. If they go too far, the Israeli navy shoots at their boats and cuts their nets.

Bourdain and Haddad then visited the Sultan family, where they were served a Palestinian staple, maqloobeh. That dish happens to be one of my specialties (Yes, ladies, I can cook.) As they were eating, the man of the house was worried about being rude. Why? The cameramen were not eating. His wife asked Bourdain to open a restaurant for her. We Palestinians are always looking for a hook-up. We need it. Her husband continued to yell, but Leila assured Anthony. “This is a normal tone of voice. He’s not upset, by the way. This is how we talk. We yell.” I can relate.

Before Bourdain left Gaza, he met and dined with one more group of men. These men, like 75% of Gaza’s population, were refugees. As he sat, laughing and eating, he told us:

Many of these guys are not too sympathetic to my country, or my ethnicity I’m guessing. But, there’s that hospitality thing. Anywhere you go in the Muslim world, it seems, no matter what, you feed your guests, you do your best to make them feel at home.

It’s true. We Palestinians are overly hospitable when people visit our homeland. Sometimes too much.

The episode ended with Natan, the owner of a restaurant right outside of Gaza in Israel. Natan’s daughter was killed by a mortar bomb in the constant struggle between groups in Gaza and Israel. Since 2008, over 1,600 Palestinians in Gaza have also been killed in this conflict.

Natan spoke of the senseless deaths on both sides. He clearly disliked settlements, and he believed it was possible for like-minded people from both sides to get together and make peace. I would agree, if just more people like Natan existed. But the people who are pointing the guns at me aren’t named Natan… They’re named Netanyahu.

By the end, Bourdain did not seem too optimistic about the prospects of peace. “One doesn’t even have to speak metaphorically because there is an actual wall… or a fence, depending on who you’re talking to.” Natan told him, “No. It is a big wall. It is ugly. It is really ugly. You can see it, it’s not far away from here.” Unfortunately, it’s not far away from anywhere.

Part of being Palestinian in America is getting really excited whenever someone tells the truth about us on American TV. Kind of depressing, right?

Anthony, in the beginning of this episode, you gave the following announcement:

By the end of this hour, I’ll be seen by many as a terrorist sympathizer, a Zionist tool, a self-hating Jew, an apologist for American imperialism, an Orientalist, socialist, a fascist, CIA agent, and worse.

* Amer Zahr is a Palestinian American comedian, writer, professor and speaker living in Dearborn, Michigan. He is also the editor of "The Civil Arab."
37 comments