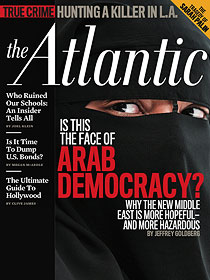 Yes, that was the cover of the most recent edition of The Atlantic, one of America’s foremost magazines on foreign affairs, politics and culture. At first, I wondered why this magazine would be advertising a Kung-Fu movie. After reading the headline, I quickly realized that it was referring to a different kind of ninja… a much scarier kind… the Muslim kind.

I came across this edition of the magazine while perusing through Borders. I always like to visit the “Middle East History” and “Islam” sections, just to catch up on all the latest publications. Through my explorations, I’ve stumbled upon a few books I’d never heard of. Some of the titles include “Because They Hate”, “They Must Be Stopped”, “A God Who Hates”, “The Truth About Muhammad”, “A Religion of Peace?”, and “Now They Call Me Infidel”. All of these books are about the peril of what has come to be commonly referred to as “Radical Islam.” One of my particular favorites was a book called “Infiltration: How Muslim Spies and Subversives Have Penetrated Washington.” This book details how “Muslims masquerading as moderates” have inserted themselves into American society, including the realms of education, government, workplace, law enforcement, and the military, all with the aim to destroy our constitutional government and turn Judeo-Christian America into an Islamic state. Oooooooh.

And of course, we’ve all heard the pundits and politicians during the Arab Spring. “Watch out for the Muslim Brotherhood,” they tell us. They ask with despair: “Will these revolutions create a vacuum for the Radical Islamists?” It’s all scary stuff, indeed.

Now, the ignorance and fear-mongering of these publications, authors, politicians, and talking heads is nothing new. I’m used to it. What is most disturbing is the commercialization of it all. There is a whole industry dedicated to scaring non-Muslims of Muslims.

The cover of The Atlantic is most misleading. We all saw the news images of the demonstrations in Tunisia and Egypt, and what we observed were young, modernized, technologically-savvy Arabs demanding liberty and freedom from their despotic leaders. Sure, I saw one demonstration in Yemen where about 20,000 ninjas were marching against the government. But it all depends on how you look at it. I just thought they were protecting themselves. I mean, it creates a great alibi. When the police come down to arrest you for leading the demonstration, you can just say, “It wasn’t me, it was her… the one with the brown eyes.”

Let me say to all Americans: Muslims are not as scary as they are made to seem. Nor are they as religious as they are made to seem. In my career, I’ve performed in front of lots of Muslim audiences. They laugh just like everyone else, and at the same stuff as everyone else. Ahmed Ahmed, one of the founders of the acclaimed “Axis of Evil” comedy tour, recently released a valuable documentary entitled “Just Like Us,” where he follows a group of comedians (including himself) as they perform throughout the Middle East. The overarching theme is that humor is universal, and that “they” laugh just like “us.”

Admittedly, Arab and Muslim crowds are tougher to make laugh. But that’s just because each member of the audience is studying the act, figuring out how to do it better on his own. I can’t tell you how many Arabs come up to me after shows and say to me, “Amer, you were so funny… I have a joke for you… You can use it.” If there’s anything wrong with us, it’s that each of us believes that we can do whatever you’re doing better than you can do it. See, we started only stocking the shelves at a gas station owned by a white guy. Now look at us.

Well, Arabs and Muslims in the Middle East have been watching democracy in other places for a long time. And contrary to popular belief here, they like it. They have been entering visa lotteries for generations just to get a taste of it. Now they’re finally going to try it on their own. I’m not surprised it has arrived late. On my last trip to the Arab World, they were still watching the first season of “Lost.”

So to all the naysayers and fear-mongerers warning us (as they profit) about the dangers of Islam, I ask you to just calm down. Give it a little time. Democracy is a new enterprise for the Arabs. They’re just learning the basics, still stocking the shelves. You never know, they might even do it better.

About Amer Zahr 181 Articles
Amer Zahr is a Palestinian American comedian, writer, professor and speaker living in Dearborn, Michigan. He is also the editor of "The Civil Arab."